Seeing photos of the nesting Brown-streaked Flycatchers (Muscicapa williamsoni) in Dave's blog last night reminded me of a bird that has remained mysterious to most birders in Thailand even until now, the resident M. d. siamensis race of Asian Brown Flycatcher. I posted some links to the photos of siamensis-type flycatchers in Dave's blog and today he came up with another even more puzzling Muscicapa flycatcher from Perdik, Malaysia. To add up to the confusion, I decided to compile photos of siamensis-type flycatchers as many as I could find on the internet here in this post.

Above are photos of the birds I photographed at Queen Sirikit Botanical Garden in Mae Rim, Chiang Mai, Thailand on 19 April 2006. A pair was found nesting in a pine tree near the garden's exhibition center. Both of them had distinctly longer and more strongly hooked bill than usual M. d. dauurica with warmer brown plumage. One of the birds showed pretty distinct brown shaft streaks on underparts similar to  those of the Brown-streaked Flycatcher. 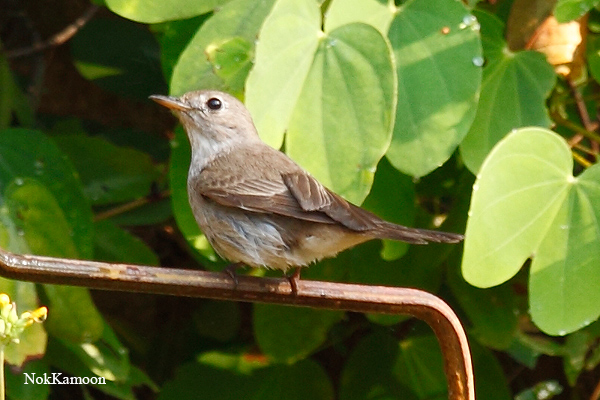 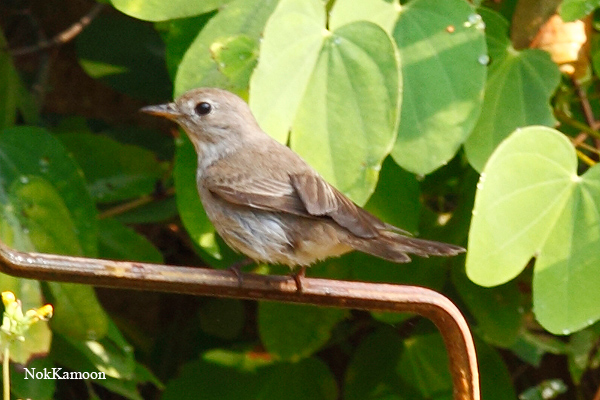 The bird in the above photos was also photographed at the same botanical garden on 16 February this year. It was seen bathing and singing. The photographer described the song as similar to Cyornis blue flycatchers. It looks pretty much identical to the flycatchers I photographed in 2006, except for the plumage which was obviously fresher.

On early April 2012, another pair of M. d. siamensis was found nesting at Wat Thum Pha Plong temple, Chiang Dao, Chiang Mai by Chintana. The nest was high up on a large open branch. The observer described the bird's habit as sitting on the nest for some time then flying out for few minutes before coming back to the nest again and again. Presumably it was incubating the eggs. 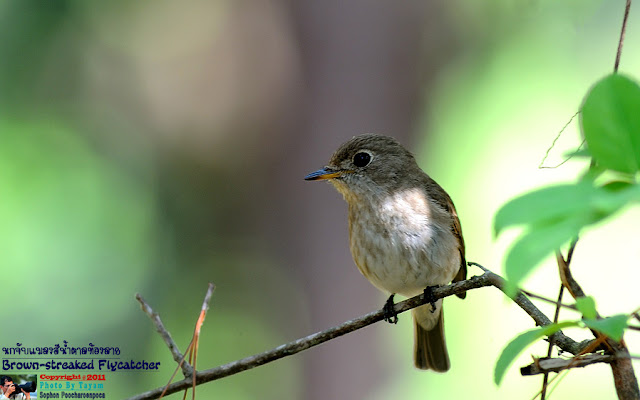 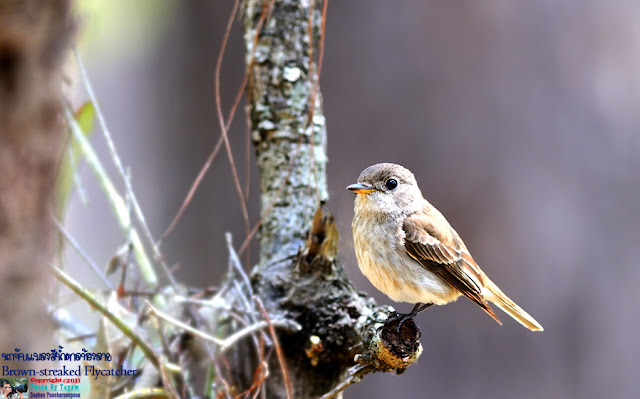 On April 12, 2011, another nesting pair was found and photographed by Sophon Poocharoenpoca at Nam Nao National Park, Phetchabun province, marking the easternmost breeding range of this race in Thailand.  The photographer initially identified the birds as Brown-streaked Flycatchers as you can see in the photos, but due to distribution range and habitat, it seems more likely to be M. d. siamensis rather than Brown-streaked. The Nam Nao birds also exhibit long and slim bill but probably slightly less hooked tip than the Mae Rim birds. They also show distinct whitish eyerings and lores, as well as fringes to wing coverts and tertials, probably even more distinct than the birds in Mae Rim. Other features which seem different are the brown streaking on the underparts which seems to be more pronounced and somewhat rufous-tinged base of outertail, a feature I've seen in several Brown-streaked photos taken in the Thai-Malay Peninsula.

I could find 2 more photos of the siamensis-type flycatchers photographed at Nam Nao NP but can't be sure about the date. The first photo by Khemthong shows a bird with completely plain underparts, totally different from the ones photographed by Sophon. It also has long and slim bill with not so distinct hooked tip (but probably can't be sure due to the quality of the photo). Another bird photographed by Woraphot (presumably photographed during mid winter) also shows the same characteristic. Also note how the white fringes are less obvious comparing to the ones photographed by Sophon, probably due to the feather wear. It also shows a hint of rufous-tinged base to outertail feathers similar to the bird in the first photo by Sophon.


Then there are more photos of siamensis-type from Huai Kha Khaeng, Uthai Thani by Wich'yanan. Two birds were photographed on two occasions and they look totally different. The first bird photographed in March shows strong brown streaking on the underparts while the second bird photographed in August shows a complete lack of any streaking. Both have longish with hooked tip bill, which is probably slightly slimmer in the second bird. Both of them have distinct whitish eyerings and lores. Huai Kha Khaeng is probably the southernmost breeding site for the siamensis-type in Thailand.

But the southernmost record of siamensis goes even further south to Phetchaburi province, where a first-year bird was caught and ringed by Philip D. Round at Laem Pak Bia project during autumn migration. The bill of this first-year bird seems to be somewhat shorter than the adults. Its lesser/median coverts, scapulars, mantle and forehead also seem to be more rufous-tinged, creating a slight contrast to the greyish-brown head and breast, which seems to be somewhat darker than the adult. Because of this bird, P.D. Round suggests that this taxon is a short-distance migrant, but how much further south it goes is still a question.

However, I still can't find any strong feature to distinguish it from the Brown-streaked, except for the habitat and distribution range which create problems to the birds found in places like Kaeng Krachan NP which lies in the range overlapped by both taxa and covers most of the preferred habitats of both. More observation and recordings of siamensis songs are strongly needed. There might be at least some differences between the songs of both taxa. Any idea or recommendation are highly appreciated!
Posted by Ayuwat Jearwattanakanok at 21:11